“You’d be hard pressed to find an event with so little impact that brings as many people and raises as much money as the Tour de Lopez.” That’s what Becky Smith, lead organizer for the Tour de Lopez, had to say after a few days to reflect on this year’s annual ride. If you experienced the island before, during and after the Tour de Lopez, it’s hard to argue with her assessment. Long before the last ferry departed on Sunday, there was no physical evidence that the island’s population had swelled by a factor of two. Every route sign had been put away, every tent taken down, every Sani-can hauled off.

The average rider might think the success of the Tour de Lopez is directly correlated with the weather. As Lopezians have seen over the years, the weather has little to do with the ride’s success. That was certainly the case this year, as rain drizzled down on riders for the first half of Saturday. No, the success of the ride is 100% attributable to the large community of volunteers, local businesses and public service providers who work behind the scenes to make it all happen. 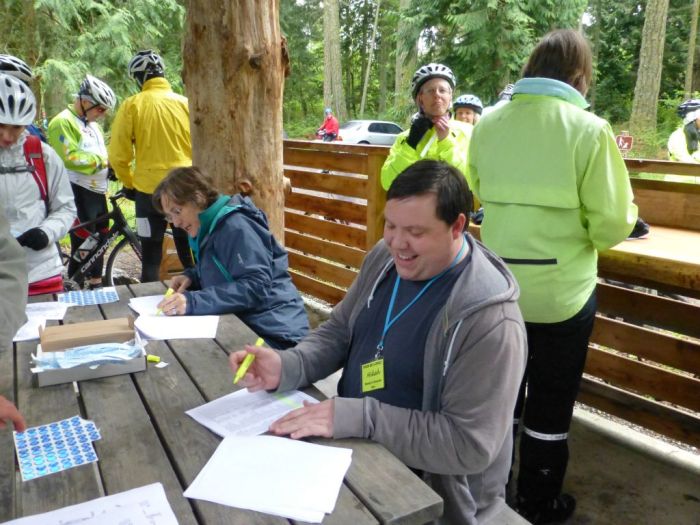 Becky gave me a few data points to help illustrate just how much this community accomplishes during the tour. Nearly 400 dinners were served during Friday’s Bite of Lopez, and more than 1000 lunches were served at the post-ride event on Saturday. That wouldn’t have been possible without the 30 volunteers who did nothing but work the kitchen and food lines.  Jeff Nichols, owner of The Galley, told Becky there’s no way he’d be able to cater that large of an event if it weren’t for the volunteers who stepped up to help serve food.

According to Becky, there were no injuries or accidents – no small feat when you consider there were 860 cyclists on the road on Saturday. That’s due to good planning, like keeping the route off of Center Road, and a team of people standing by just in case somebody does need help. A dozen volunteer firefighters and medics were stationed along the route all day, and each rest area had as many as 10 volunteers. 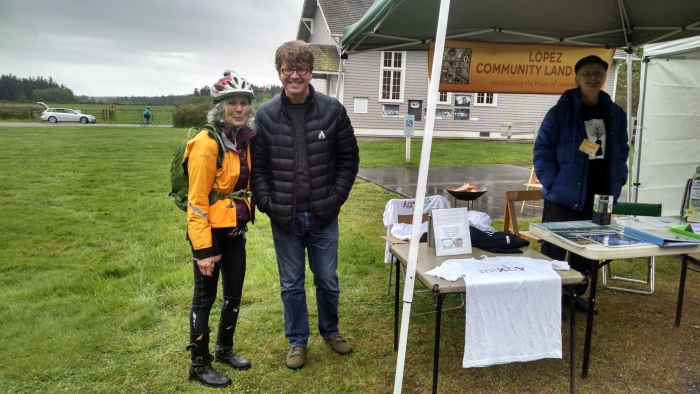 Ben McAllister from Mixby was lucky enough to be stationed next to Rhea and Sandy from the Lopez Community Land Trust, who sponsored the Port Stanley Schoolhouse rest area.

Lopez businesses always contribute in ways you might not expect. A perennial issue is bike storage at the Community Center after the ride. Imagine 860 bikes strewn across the lawn. There are only so many signature green and yellow Lopez Bicycle Works bike racks that can be brought to the Village (ever try lifting one of those things?) This year, Becky’s husband Bob used some Lopezian ingenuity and a Skil saw to turn 28 old pallets from Sunset Builder Supply into 14 temporary bike racks. It worked like a charm. I hear that the fire department is planning to burn all of those pallets for one of their practice burns this Saturday.

The Washington State Ferry system has been criticized quite a bit recently, but they were a major factor in this year’s successful Tour. On Saturday morning alone, they carried 310 bikes to Lopez Island – more than one-third of the bikes on the road that day. This is an especially impressive statistic when you consider the average ferry to Lopez has room for about 90 cars, and only a fraction of those spaces are reserved for Lopez.  It was certainly an impressive sight to watch all those bikes disembark the 7:30 AM boat from Anacortes.  To me, that’s the way to travel to the Tour de Lopez. 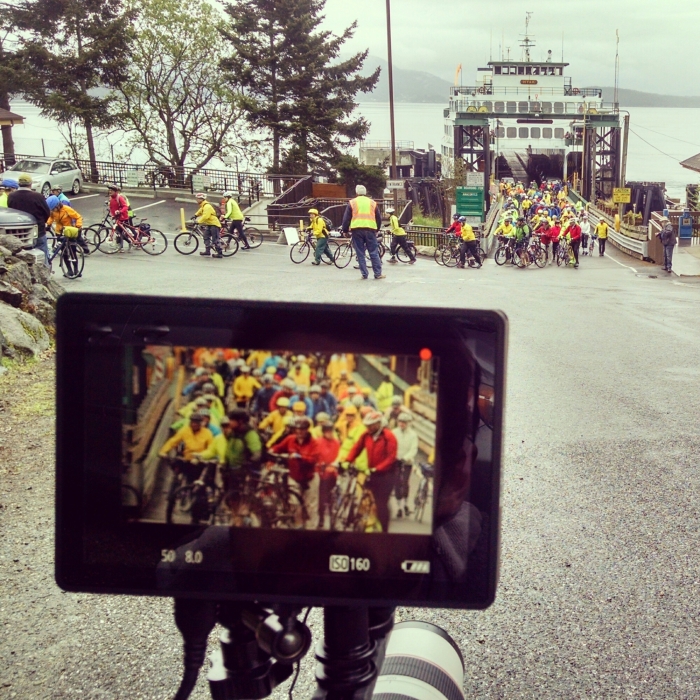 For those who came to the island in cars, the ferry was very accommodating. I was at the ferry landing part of Sunday and watched as WS DOT employees packed as many cars as possible onto each boat. It was fun to see drivers’ expressions turn from heartbreak to elation when ferry workers would motion them forward to be one of the last cars to get on the ferry. “Bottom line, everybody got off the island on the day they wanted to get off the island,” Becky said appreciatively as she described the support provided by the ferries over the weekend. WS DOT was even willing to make an extra Lopez stop on Sunday night if there were still people waiting to depart the island.

Literally behind the scenes, I spent my Tour de Lopez with a camera crew who volunteered their time to capture video footage for a documentary we’re making on the Tour de Lopez (available this summer). As much as I would have preferred to be on a bike all day, it was great to see the looks on people’s faces as they took in the beautiful scenery and discovered the friendly people of this island. The Tour de Lopez is a yearly reminder that, as Jeff Nichols told me a while ago, “people come to Lopez for the beauty; they stay for the community.” Thank you to Becky and this amazing community behind the scenes for making it happen year after year. 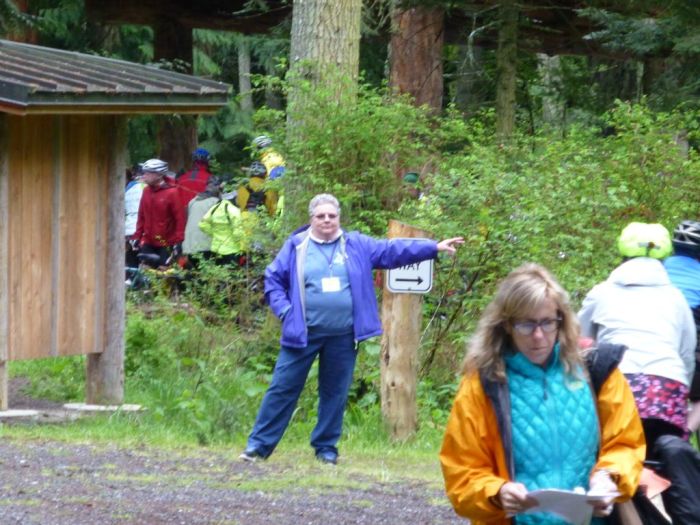 6 thoughts on “Behind the Scenes: Tour de Lopez”