These days, the mention of science and farming in the same breath immediately brings to mind the hotly debated issue of GMOs (against which, by the way, San Juan County recently scored a victory). But that’s not necessarily what comes to mind for Nick and Sara Jones of Jones Family Farms. Step inside one of the buildings on Jones’ Sweetwater shellfish farm on Shoal Bay, and you’ll understand why. Alongside the tubs holding millions of baby oysters and clams is an array of objects you’d associate more with a mad scientist than you would a shellfish farmer: beakers, pipettes, microscopes, tubes with fluorescent lights running through them, and – my favorite – human-sized bags full of green liquid.  It’s a scene right out of a science fiction movie. But this isn’t somebody’s little science experiment. This is home of the largest supplier of clam and oyster seed to independent shellfish farms in the region, and producer of some of the highest quality shellfish for Seattle, one of the most discriminating restaurant markets in the world. 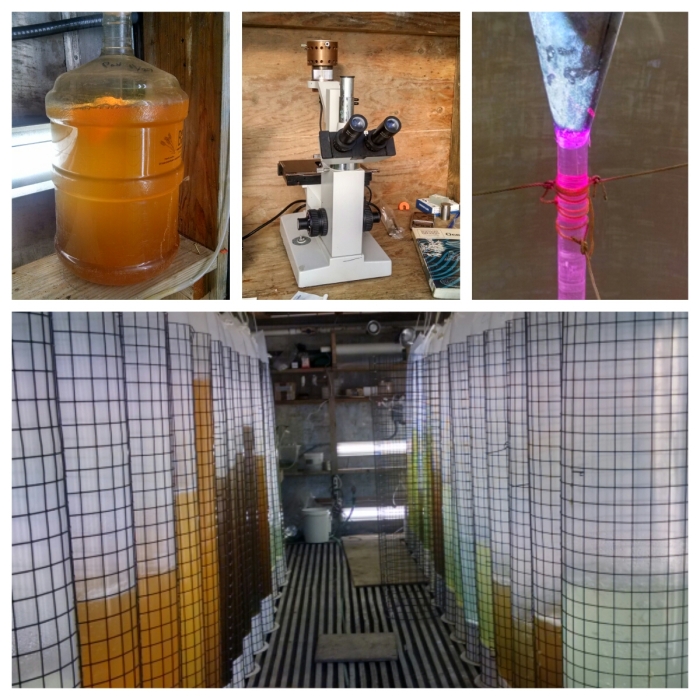 Nick Jones graciously offered to spend time with Sue Roundy (of the Bounty Project) and me earlier this week – to give us a sense of what it has taken to earn their enviable position within the rapidly growing farm-to-table movement. For starters, it takes a lot of hard work and determination – especially when temperatures hover around 30 degrees, threatening to freeze the hoses that bring food and water to the dozens of tanks housing their precious shellfish. It also takes a healthy dose of optimism. As Nick gave us a tour of the facility, he said his favorite thing about farming is that, “there’s always something to look forward to.” And finally – and this I think is the key to Jones’ success – it requires constant experimentation and improvisation. I’ve visited Sweetwater a half dozen times over the past few years, and every time I come back, Nick and his team have completely rearranged the facility. Every few weeks it seems they’re moving the buildings around or re-plumbing the entire operation – no small feat when you consider the miles of PVC pipe that draw water from the nearby lagoon, bring it to the right temperature, circulate it through dozens of oyster tanks, and return it to the sea. Sweetwater is the definition of work-in-progress.

Even more impressive are the experiments aimed at scaling a shellfish farm operation despite significant challenges such as location and the high cost of supplies. Because tiny oysters eat algae, and lots of it, Jones had to find a way to grow his own. A small bottle of algae costs about $35, making it prohibitively expensive to buy the amount required to feed the tens of millions of oyster larvae growing on Jones’ farm. Enter science – and the marine biologists Jones has hired to make sure they get this experiment right. In the middle of the shellfish farm sits an old shipping container, the walls of which are lined with bags of seven different species of algae – to accommodate the diets of oysters at different stages of development. They must be doing something right, because the Sweetwater team is in the process of tripling the size of their algae production – transitioning from the algae room (pictured above) to what the guys are calling “the algae dome.”

Power is another big challenge. Algae needs light to grow. Fluorescent lights require a lot of electricity, not to mention throw off a lot of light that Sweetwater’s neighbors probably wouldn’t appreciate. Which is why Nick is experimenting with ways to transfer light efficiently inside dark vats of algae using polarized tubes – a method he’s borrowed from another farming industry (one that until very recently hadn’t been legal in Washington State).

It’s innovations like these that are allowing Jones to produce head to head with any shellfish producer in the world. And it’s what’s driven the steady growth of all of the Jones Family Farms, now one of the biggest employers on the island and one of the region’s leaders in sustainable farming – something for which Lopez is becoming more and more known. According to Nick, shellfish farming, given the ability to tap into an infinitely reproductive system, is going to drive the future growth of Jones Family Farms.  This provides a glimpse into Jones’ philosophy, which is based on the belief that the world does not have to be a zero sum game – there are ways to benefit from natural resources without necessarily constantly diminishing our supply. There are those who disagree with Nick on this, but it’s hard to argue with him given what he’s accomplished with Sweetwater.

There’s a lot more to learn about Jones Family Farms. They have a whole other side of their business focused on producing grass-fed meats on Lopez, which will probably be the focus of another Project 468 blog post. They also own a sausage making company, Link Lab Artisan Meats, in Seattle – acquired in April. You can find their products around Lopez and the San Juans – at the South End General Store and farmers’ markets. If you’ve eaten at a Seattle restaurant recently, food from Jones Family Farms has probably been on the menu. And back on Lopez, during the warmer months, you can stop by Sweetwater to buy fresh fish, crabs, clams and, of course, oysters.

So, where will Nick and Sara Jones turn next for experimentation? Well, I wouldn’t be surprised if you started seeing more of the Jones’ farms growing grain. I think Nick has his sights set on a distillery. 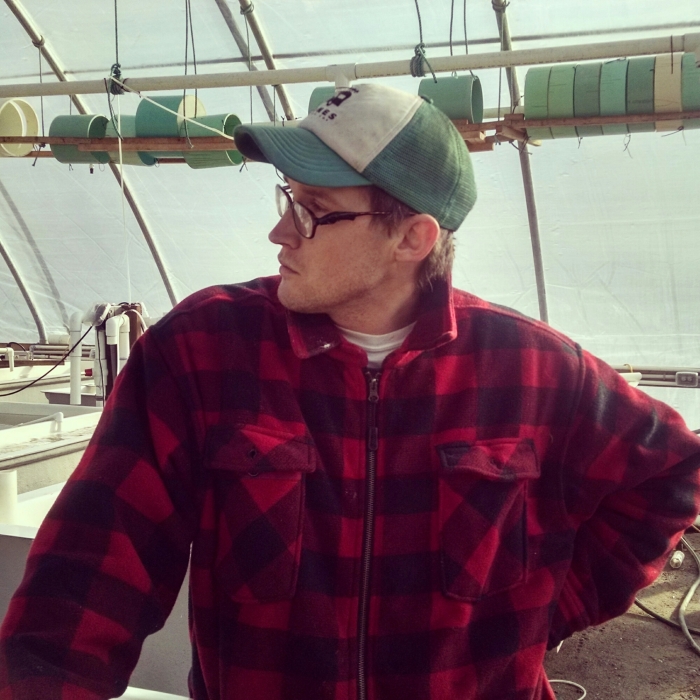 4 thoughts on “The Biggest Science Experiment in the San Juans”