Lopez Island represents renewal, experimentation and improvisation. I can’t think of an organization that lives up to those ideals better than the Lopez Solid Waste Disposal District, otherwise known as the dump. My family pays a visit to the dump every few weeks to sort our recycling, pay a visit to the “Take It Or Leave It” shed, and maybe leave a bag of trash. I stopped by the other day to learn a bit more about how the place works.

I’ve written several 8-dollar checks to him over the years (that’s what it costs if you want to deposit a bag of garbage at the dump), but I didn’t know his name until the other day. Bob, one of the two salaried employees at the dump, manages the facility and greets people from his booth as they pull up in their vehicles. I pulled up on my bike, explained what I was doing with Project 468 and asked if I could take a few pictures. “Take all the pictures you want,” he said, “and, take home something from the Take It Or Leave It.”

I proceeded to snap photos of different parts of the facility: the sorting bins where volunteers make sure you’re putting things where they’re supposed to go; the corrugated cardboard conveyor belt; and, of course, the Take It Or Leave It shed, where residents of the island leave everything from old clothes to building supplies to bicycles (after all, this is the biker’s island).

Recyclable materials are sorted and made into bales to be sold.

The dump sells plastic for 16 cents a pound. 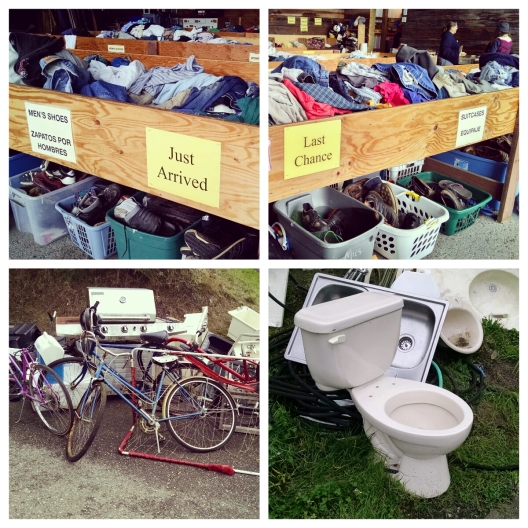 You can find everything at the Take It Or Leave It.

The Lopez dump is pretty famous. It’s been reported on for years by various news organizations, and it’s won several awards for being one of the best recycling programs around. Bob tells me that people come from around the world to check it out. I can personally attest to its popularity. My kids never want to miss a trip to the dump. What LSWDD has done is pretty incredible. Their main message is “working toward zero waste,” and they’re inspiring the community to do just that. At my house, our consumption habits have changed. We buy products differently, we think twice before putting something in the garbage can, and we are obsessed with recycling. The volume ratio of recyclables to garbage in our garage is probably 20/1.

4 thoughts on “The Dump’s Story”